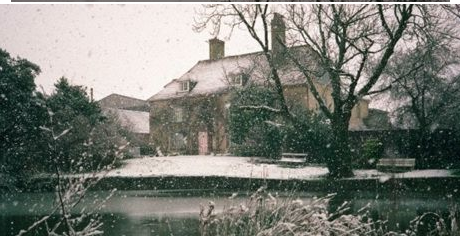 ” . . . It has a charming garden, with a pond, and fruit trees, and vegetables, all now rather run wild, but you could make it lovely”.

In the winter of 1916, the artist Vanessa Bell asked her sister, the writer Virginia Woolf to help her find a country retreat for herself and her friend, the painter Duncan Grant. The first world war was calling up more and more of England’s young men and as pacifists, many of their circle of London friends, known as the Bloomsbury group, were choosing to make a stand, and become conscientious objectors, a term used by those who refused to take up arms for any number of moral, religious, political, or ethical reasons.

An alternative to signing up was to volunteer as labourer for the war effort and for this reason, as well as the illegality of homosexuality, Duncan Grant and his then lover the writer David Garnet chose to leave London and find retreat in the countryside.

So, on the 16th of October 1916, Duncan, David, Vanessa, her two young sons, Julian and Quentin and their dog Henry the lurcher all moved into Charleston farmhouse, a seventeenth century building with no running water, heating, or electricity; situated at the foot of the south downs in East Sussex. To make things even more challenging, it was at that time, recorded as the coldest winter in living history.

The two young men took on hard labour in the nearby farms picking turnips from the icy ground. Every evening they would come home and huddle around the kitchen Argur, in the warmest room of the house nursing their blistered hands.

Despite the hardship and limited resources, Vanessa, and Duncan both set about turning the house into a home, hand painting old furniture and, using their artistic flair to decorate every room, covering any mould and damp with extraordinary colours, patterns, and motifs. They upholstered chairs in their own printed designs, made lampshades and ceramics. They grew a beautiful garden, half of which helped feed the family and their circle friends who would come and visit regularly.

The home became a hub for the bohemian and avant-garde, a place to retreat from conformity and live their best lives, whilst the world raged around them.
If you were invited to a dinner party at Charleston, you may have been seated at the hand painted round table next to Benjamin Britten, TS Eliot, Maynard Keynes, or Virginia Woolf. It was a place where lively conversation, creative thought and inspired ideas were freely shared between some of history’s most innovative minds.

They believed in intellectual and creative freedom and Charleston gave them the space to practise just that. They were self-sufficient, resilient, and focussed on what they as a family needed, a free environment to thrive and create.

They lived at Charleston Farmhouse for over 50 years and through two world wars. After Duncan and Vanessa died, the remaining family including their daughter Angelica, raised enough to buy their home (they never owned) from the Firle estate and to conserve it into a museum and gallery.

Today Charleston Trust still stands as a beacon for individuality and creative resilience. Every year thousands of people from all over the world take tours through the house and studio, enjoy the stunning walled kitchen garden, and partake in many events, festivals, and exhibitions on the grounds, threshing barn and galleries. They come to be mesmerised and enchanted by the life stories of these extraordinary people, who created their own world, unswathed by convention, to live a truly unique and resilient life.

At the next Winter Resilient Workshop you will spend a day of gentle meditation, mindfulness and yoga, at Charleston Threshing Barn.